Paddy Clarke became the 1st player in well over two decades to win back to back Singles titles after a mesmerising performance last Thursday. Clarke was simply sensational. From the semi-final onwards he was virtually untouchable. His final opponent Pat Brady cruised to the decider dropping only won frame and it meant the CWC A team mates would contest the individuals finale for the second year in a row.

Brady won 3-1 against Cathal Phelan, 3-0 against Seamus McVerry and 3-0 against Raymie McKenna in the semi. Clarke stuffed Shane McAllister 3-0 then had a right royal battle in his last 8 match. He was on course for a routine win against Thomas McGuinness when he led 2-0 but the St. Monnina player fought like an injured lion to pull it back to 2-2. The real Paddy Clarke stood up in the decider and squeezed into the semi with a brilliant finish and beat Kieran McMahon 3-0 in the last 4. The two played out a classic final last year when Paddy Clarke edged a thriller 4-3. This year Clarke was in devastating form and he never gave Pat Brady a sniff, racing into a commanding 3-0 lead. Brady needed to win all 4 of the remaining frames and although he pulled it back to 3-1 nobody in the Forester's club really believed a comeback was possible. Clarke made no mistake in wrapping up his second consecutive individuals title at 4-1. Clarke was just on a different playing field. He whizzed around the table producing his magic every time his tip struck the white ball. In his semi-final match he blitzed Kieran McMahon  3-0. There's not many players can say they annihilated Pat Brady and Kieran McMahon with an accumulative score of 7-1. Two legends of Newry Pool just brushed aside with nonchalance. Not only two legends but  two team mates to add to the pressure. Paddy Clarke had lots of praise for the Forester's club, Newry Pool league, the livestream and the fantastic crowd that attended the finals night. For all those who enjoy reading the winners we tipped' you will be delight to hear we got one or two wrong. Of the last 8 matches we got only one game wrong. Dee Kearney couldnt  get over the line against Seamus McGeoghegan. Of our 1/4 picks only Terry McNally didn't make it to the semi-final. Kieran McMahon was just too good and the 'Machine' McMahon booked his spot 2-1. We did get the final pairing correct but we went for Pat Brady and the way he was playing in the build up our pick looked good. Paddy Clarke turned on the style to and he'll be a short price to retain his title next year again. 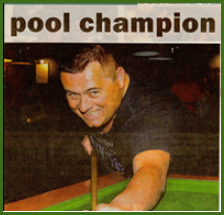