The Baby Faced Assassin was on last as his Bears side looked set to become almost certainly the first team in the history of the Newry pool league to get relegated from the top flight in two consecutive seasons. With the weight of Premier Division status on his shoulders, the Bears and all their cubs could do nothing as 'Assassin' Neil Heaney approached the table.

Bears travelled down the hill to Hustlers in the final league game of the Premier Division season. One of these two teams would join Nan's Rams in the relegation doghouse. Hustlers led Bears by a point going into this decider. A draw would be enough to secure Premier safety for Hustlers and having home advantage could be a huge boost for them.

Hustlers started brightly with Sheepbridge barman Gwyn Trainor taking the opener against a talented but slightly inconsistent Newly Wed Eddie Heaney.
It was a clash of the titans up next. Two monumental influences on their team. Kevin Magee is the Hustlers captain while Diarmuid Lonergan is tough as teak and a real leader that demands the best from his team mates. Lonergan edged out Magee in a tense match to tie the scores at 1-1.
Ciaran O'Neill was red hot favourite against Paddy Heaney. Heaney hasn't played a lot this season while O'Neill recovered from a poor start to the season to become one of Hustlers best players. It was no surprise young O'Neill took the win and it was 2-1 Hustlers. That massive win for O'Neill meant Bears had to win 4 of the next 5 frames or they would be playing Division 1 pool next season.
Seamus 'The Snail' Keenan has had a very good season for Bears and his pool knowledge was too much for Denvor Jenkins. 2-2.
Billy O'Neill v Garry Powell was a massive frame. Both very experienced players. Neither have been at their very best this season but both are tough opponents. Powell came out on top and for the first time Bears had the lead. 3-2.
Shane McAllister and Ralph Crummy were two of the more skilful exponents of the beautiful game Thursday night. Both tremendous potter's and superb in the safety department. McAllister is one of the best players in the league on his day and he put his Hustlers team within 1 frame of safety with a fine display. 3-3.
Now Bears needed the final 2 frames and Hustlers just the 1.
Ray Magee was 1st up for the home side. The pressure was really on both sides now. One more slip up would be devastating. Paul Murphy was tasked with giving Bears one last fight for survival. Murphy's class shone through and he took this classic relegation fight to the final frame. 4-3 Bears.
The whole league season for both these teams now came down to one single frame. Barry Murphy v Neil Heaney. The winner would send their team into wild celebrations while the loser would have to reflect on what might have been.
Barry Murphy has had a decent season. He's had mixed fortunes while playing 8th but he is no stranger to that position. Neil Heaney has played last before but arguably his free flowing pool is more suited to playing early.
Cometh the hour cometh the man. It was time for the Executioner, the sniper, the exterminator and dare we say - The Baby Faced Assassin to come to the party. His sniper accurate potting and ice cool nerves held firm as he slotted home the final black for mesmerizing win. Hustlers 3-5 Bears.
Bears were safe. Hustlers were relegated.
Bears celebrated enthusiastically after they produced one of the most enthralling final day relegation rescues you are ever likely to see, while the Hustlers had to get used to the reality they would play Division 1 pool next season.

Hustlers will rue the fact they turned up a few Thursday night's with only 7 players. Players like Shane McAllister and Ciaran O'Neill will certainly come onto the radar of some Premier Division teams in the summer.

Bears and Hustlers both have cup semi-finals to look forward to so their seasons are far from over. 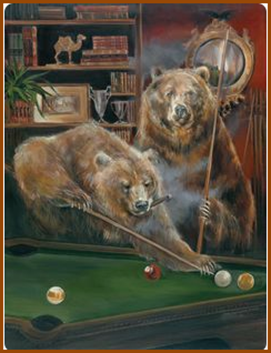